Artoo was featured in BlommbergQuint by Mayank Jain. You can read more here or online .

Can a simple conversation help a small business owner get a loan? Without the hassle of a long drawn out application process and myriad forms to fill?

Using big data and analytics, Artoo claims it can tell microfinance companies and small finance banks whether to lend to a particular customer based on a simple conversation. The company uses the existing workforce of a lender, arms them with Artoo’s technology and the required analytical skills for faster and more efficient processing of loans. 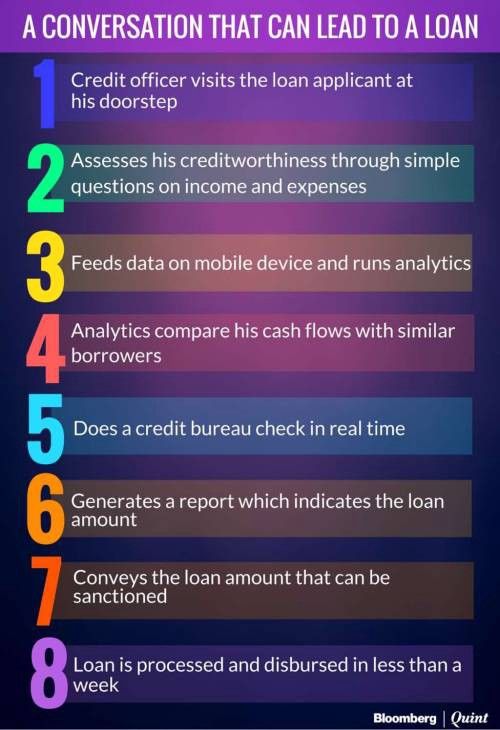 The segment they are targeting is what is widely known as the missing-middle of the loan market. Micro, small and medium enterprises that find it difficult to get credit from the formal financial system. A study by International Finance Center in 2012 found that 94 percent of Indian MSMEs are unregistered, which limits their access to credit.

“These businesses are largely cash-based so their digital footprint is fairly limited. They often run multiple businesses so one doesn’t get a full picture of their finances by just looking at one part of the income stream,” said Sameer Segal, founder and chief executive officer of Artoo while explaining the thinking behind their process which combines available credit information, comparison with peer borrowers and information provided by the applicant.

This process is less-paper heavy and relies on data analytics in the absence of a formal credit history, Segal added.

Segal believes that the credit needs of the MSME sector are large but they often get left out to the formal banking sector. Correcting this is essential for a sector which provides a bulk of growth and employment to the economy.

How The Process Works

With Artoo’s technology, the credit officer is able to run a quick background and credit check on an applicant through his tablet or smartphone which provides real time information on their credit history. This, together with a conversation with the borrower, is used to a generate a credit report, based on which a loan is disbursed.

Segal says it is not and argues that Artoo collects 800 data points before coming up with a decision on the amount to be loaned out.

At the end of the conversation, we are able to tell the customer the loan amount that we will be able to offer. The field agent uses pre-made templates to ask very specific but simple questions to assess their financial position. We are able to collect 800 data points around the business which is mostly soft data including their standard of living and going to the kind of roof in their homes.

Artoo says it has profiled 4.5 lakh businesses across the country with total disbursements clocking Rs 1,800 crore. They use this database to conduct a peer review which looks for any exaggeration of income or any under-reporting of liabilities by a potential borrower.

The use of technology reduces the time and cost involved in the process. Artoo claims that the cost of acquiring a new borrower reduces by as much as 45 percent if a lender uses their technology.

A big challenge for MSMEs, used to informal sources of credit, is getting a first time lender to trust them, said Segal.

The way we build trust is by using secure technology every step of the way and spending the required time instead of rushing through the process. We use optical character recognition, and e-KYC to establish their creditworthiness. The borrower also feels reassured that someone is interested in providing them a loan. That builds trust.

The push for digitisation isn’t new for the credit industry which has been keen to adopt Aadhaar enabled e-KYC and online credit information services, but Artoo’s end-to-end handling of the processes differentiates it from competition, Saigal added.

The SME lending space has attracted a number of firms making it a competitive field already.

Artoo competes with LendingKart which offers loans through its website and apps to SMEs. Capital Float, which provides working capital financing without any collateral through its online platform, also operates in this segment.

Segal, however, insisted that Artoo is a differentiated product.

“Most players are working for the top 2 percent of the customers who already have ready credit histories and digital footprints to back them up. We are chasing the other 98 percent,” Segal said. “Most of the companies are focussed on the back-office automation but for MSMEs, you have to be on the field. That’s where the data is.”

Experts feel that use of big data and technology is only going to increase in the financial sector and creditworthiness is better determined through analytics than someone’s personal judgement. However, checks on cash flows need to be more robust, said Kalpesh Mehta, partner — banking at Deloitte.

There are two-fold analysis models prevalent in the industry where people are not just judging the applicant’s financials but the situation of similar borrowers across industries. The idea is to judge if the cash flows are stable and predictable and it always helps to have more data than less.

Mehta adds that the use of technology and big data is going to be the new era of loan origination. “Post demonetisation, analytics will be more useful to take a call on creditworthiness as the cash situation wavers,” Mehta said while adding that some of the analytics used in these new models are far superior to just looking at an annual financial statement.