Driving change through technology is only a click away

The Ashoka Impact Series features Sameer and his work at Artoo — read more below or on the Ashoka India website. 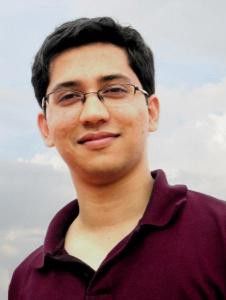 A lover of Bollywood films and technology, Sameer Segal is a young changemaker who is making the work of those in the field of development several steps easier. Sameer struggled to find a way to escape a typical career path after graduating from the National Institute Technology, until Banker to the Poor, a book by Muhammad Yunus, introduced to him the world of microfinance. Barely after a year of his graduation, Sameer, along with his wife (then girlfriend) Indus, engineered Artoo. Artoo, named after one of Sameer’s favorite characters from Star Wars, has developed a software solution designed to help field agents of enterprises working at the base of the pyramid become more effective in serving their end customers.

I could now see the development track was a viable career option - it is possible to do good and do well!

Advocating technology to the rescue, Artoo relieves field agents of the burden of paper work and does away with innumerable delays by utilizing tablets or smart phones to fill in customers’ information — instituting real-time information exchange between microfinance or health institutions and their field staff and reducing turn around times. Artoo takes the entire process of data collection and workflows online, drastically reducing expenses and time consummation.

Sameer, now 25, was born in Delhi but brought up in Bangalore. He went to National Public School for 1st grade, later studying in the Valley School, a school Sameer notes as ‘unconventional’ before returning to conventional schooling in 11th standard. Sameer described his childhood as very ordinary; he grew up listening to stories from his father about working with ‘Tech giants like HP and IBM.’

These stories fostered an obsession with computers and programming, ultimately leading him to electrical engineering in NITK. However, like most other engineering students, he gradually lost interest and realized that he wanted to do something different. ‘As I went along my engineering course, I got pretty bored. It was very theoretical, you don’t really learn much and there is not much motivation while you’re at an engineering programme’, said a smiling Sameer. He came across Engineers for Social Impact (E4SI),a unique fellowship program that connected top engineering talent to credible social enterprises driving market-based solutions to development in India. He acquired a fellowship and an internship with Ujjivan Microfinance, Bangalore. He says, ‘I could now see the development track was a viable career option — it is possible to do good and do well!’

Regarding the success of Artoo, ‘I don’t think we have achieved something yet, Its just the beginning,’ Sameer modestly replies. The Paragon100 Fellowship has recognized Sameer as one of the most promising social entrepreneurs and Artoo continues to be a startup on the cusp of an emerging technological breakthrough. To all the budding entreprenuers, he simply wants them to believe in themselves and not give in to criticisms or minor failures. Once calling his choice ‘career suicide,’ his father now stands proud. Believing that he represents a new generation capable of exploring a lot more, Sameer notes that revolution has just begun.